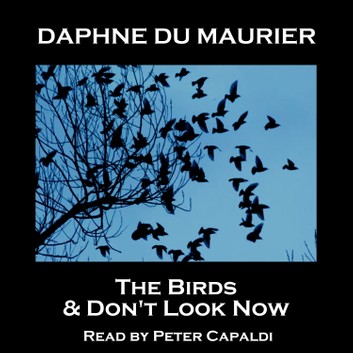 From Goodreads: “Du Maurier is of course world famous for many of her novels. These two stories are perhaps even better known as films (The Birds by Alfred Hitchcock and Don’t Look Now by Nic Roeg), but here we bring you the full terrifying texts, superbly read by Peter Capaldi, who brings the true dimension of these works to the imagination.“

I loved The Birds it was very sinister with tension increasing all the time.  I don’t like seagulls at all and I think this added to the horror of the story, having been dived bombed whilst having beach BBQs and also having an ice-cream snatched out of my hand, a frightening experience as they’re big birds!! The Birds was excellent and nothing like the Hitchcock film, well the bits I’ve seen, as it’s set on farmland in England, not in America. Don’t Look Now however was just okay, it felt very dated and the tension wasn’t that high probably because I’ve read or seen similar plots in films or on TV. Peter Capaldi’s narration was superb confirming to me what a fantastic narrator he is. I especially enjoyed his narration of The Birds.

From Goodreads: “To solve an impossible murder, you need an impossible hero…
Judith Potts is seventy-seven years old and blissfully happy. She lives on her own in a faded mansion just outside Marlow, there’s no man in her life to tell her what to do or how much whisky to drink, and to keep herself busy she sets crosswords for The Times newspaper.
One evening, while out swimming in the Thames, Judith witnesses a brutal murder. The local police don’t believe her story, so she decides to investigate for herself, and is soon joined in her quest by Suzie, a salt-of-the-earth dog-walker, and Becks, the prim and proper wife of the local Vicar.
Together, they are the Marlow Murder Club.
When another body turns up, they realise they have a real-life serial killer on their hands. And the puzzle they set out to solve has become a trap from which they might never escape…“

This was such good fun! I loved Judith and Suzie, I’m still not too sure about Becks she was a bit too wimpy for me although she came into her own by the end of the book. The mystery was good with lots of red herrings. I loved the setting of Marlow as I have a friend who lives there so I kept looking at Google Street View as I was listening. Nicolette Mackenzie’s narration was perfect, she brought the wide range of characters to life brilliantly. Definitely recommend this on audio and can’t wait for the next one in the series!

The Happiest Man on Earth: The Beautiful Life of an Auschwitz Survivor by Eddie Jaku read by Jacek Koman 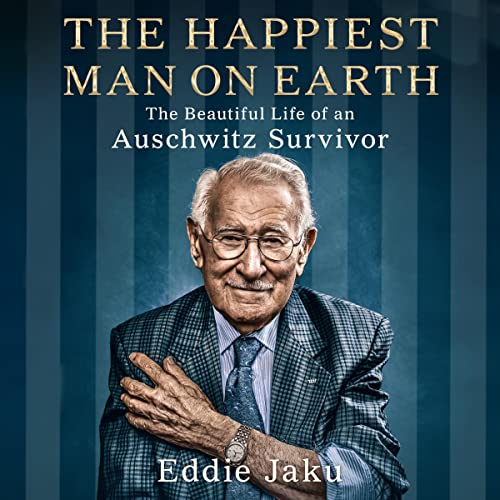 From Goodreads: “Life can be beautiful if you make it beautiful. It is up to you. Eddie Jaku always considered himself a German first, a Jew second. He was proud of his country. But all of that changed in November 1938, when he was beaten, arrested and taken to a concentration camp.
Over the next seven years, Eddie faced unimaginable horrors every day, first in Buchenwald, then in Auschwitz, then on a Nazi death march. He lost family, friends, his country.
Because he survived, Eddie made the vow to smile every day. He pays tribute to those who were lost by telling his story, sharing his wisdom and living his best possible life. He now believes he is the ‘happiest man on earth’.
Published as Eddie turns 100, this is a powerful, heartbreaking and ultimately hopeful memoir of how happiness can be found even in the darkest of times.“

This was an amazing audiobook, one that I found via Twitter around Holocaust Memorial Day last month. I’d not heard of Eddie Jaku before which is extraordinary as his story is incredible! I loved Jacek Koman’s narration, he really brought Eddie’s story to life, and I felt like I was actually listening to Eddie himself. One thing that Eddie mentioned throughout his story, was how important friends were to him over the years, especially in Auschwitz. He said that one friend in particular kept him going, and it reminded him of his father’s words, that friendship and love were more important than money or possessions. He also remembered how important his education had been, particularly his education in engineering, that saved him from the gas chambers many times.  He really was an inspiration even after the war when he moved to Australia with his new wife Flore. I must admit that it was a very difficult listen at times, especially as he described the horrors he went through, revealing things I’d not read before, or maybe not taken in before from books about the Holocaust. It was an upsetting story, but also a hopeful one and one I’m very glad to have listened to. Definitely recommended if you are interested in Holocaust memoirs.