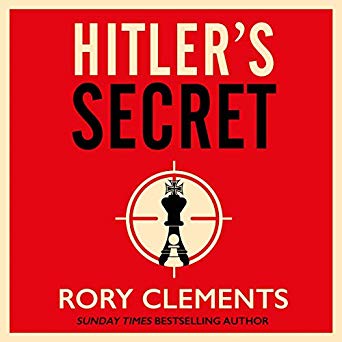 Goodreads synopsis: “In the Autumn of 1941, the war is going badly for Britain and its allies. If the tide is going to be turned against Hitler, a new weapon is desperately needed.
In Cambridge, brilliant history professor Tom Wilde is asked by an American intelligence officer to help smuggle a mysterious package out of Nazi Germany – something so secret, even Hitler himself doesn’t know of its existence.
Posing as a German-American industrialist, Wilde soon discovers the shocking truth about the ‘package’, and why the Nazis will stop at nothing to prevent it leaving Germany. With ruthless killers loyal to Martin Bormann hunting him down, Wilde makes a desperate gamble on an unlikely escape route.
But even if he reaches England alive, that will not be the end of his ordeal. Wilde is now convinced that the truth he has discovered must remain hidden, even if it means betraying the country he loves . . . “

Set in autumn 1941 the book opens with Professor Wilde being asked by an American Intelligence officer to travel to Berlin to collect a package to bring back to England. As the synopsis above mentions Wilde is totally oblivious to what he is picking up, going off expecting a fairly quick trip without too many problems. Of course if you’ve read any of the previous books in this series you know that there’s no way that that’s going to happen.

And so begins the fourth book this in brilliant series. Rory Clements drops us right into the heart of Nazi Germany, with Tom Wilde having to watch everything he says and being careful wherever he goes. As Tom finds out more from his friend Jim who works for the American Embassy, he realises that getting the package back to England is going to be a lot more complicated than he was led to believe. He suddenly regrets getting involved and wishes he could be back home with Lydia and his toddler son Johnny.

Tom Wilde finds himself on his most dangerous adventure yet, meeting people who will help, hinder and down right confuse him. Who can he trust and who should he avoid at all costs?

I thoroughly enjoyed this on audio and thought Adam Sims narration was outstanding! I loved his portrayal of Tom Wilde and enjoyed the way he portrayed the villains throughout the book. There were so many untrustworthy characters that like Tom I really didn’t know who to trust.

I thoroughly recommend this book and the series, especially if you enjoy thrillers set in World War Two.

Thanks so much to NetGalley and Bonnier Zaffre for my digital copy.