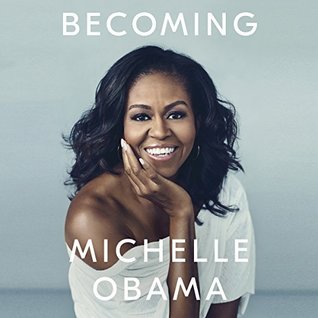 Goodreads blurb: “An intimate, powerful, and inspiring memoir by the former First Lady of the United States.

In a life filled with meaning and accomplishment, Michelle Obama has emerged as one of the most iconic and compelling women of our era. As First Lady of the United States of America—the first African-American to serve in that role—she helped create the most welcoming and inclusive White House in history, while also establishing herself as a powerful advocate for women and girls in the U.S. and around the world, dramatically changing the ways that families pursue healthier and more active lives, and standing with her husband as he led America through some of its most harrowing moments. Along the way, she showed us a few dance moves, crushed Carpool Karaoke, and raised two down-to-earth daughters under an unforgiving media glare.
In her memoir, a work of deep reflection and mesmerizing storytelling, Michelle Obama invites readers into her world, chronicling the experiences that have shaped her—from her childhood on the South Side of Chicago to her years as an executive balancing the demands of motherhood and work, to her time spent at the world’s most famous address. With unerring honesty and lively wit, she describes her triumphs and her disappointments, both public and private, telling her full story as she has lived it—in her own words and on her own terms. Warm, wise, and revelatory, Becoming is the deeply personal reckoning of a woman of soul and substance who has steadily defied expectations—and whose story inspires us to do the same.”

This was such a fascinating listen. Firstly because I didn’t know much about America’s former First Lady, but also because she reads the book herself, bringing something extra special to this memoir.

I loved listening to her life story, as a young girl with her brother and parents living in a small apartment above her uncle and aunt, her school and college years and then when she’s working in a law office and mentors Barack during a summer internship. I loved her initial thoughts and feelings towards Barack and especially loved hearing her account of when he finally proposed to her.

Her account of fertility issues, her early days of motherhood and then going on to becoming a working mother, were so genuine and had me feeling quite emotional at times. I was surprised but also very grateful for her candidness in this era of fake news.

Her thoughts about politics and politicians are honest all the way through the book, and I was quite surprised about her serious reservations towards Barack running for the Senate and then President. I was appalled by the Republican party’s attitude towards Barack whilst he was running and even whilst in office, opening my eyes to American political arena.

I really enjoyed her chapters about living in the Whitehouse and did not envy her for one minute! I can’t imagine what it must have been like having so many security personnel around them, it makes me appreciate my normal lifestyle. There was a lovely account of how her Mum refused all the trappings of Whitehouse life when she went to live there.  Apparently she’d do her own laundry and pop out to the shops by herself. When people mentioned her likeness to Michelle Obama’s mother she’d reply ” Yes I get that a lot! 😀

One of the stories I loved was when Michelle accompanied Barack on a G20 meeting in London and met the Queen at Buckingham Palace for the first time. After initial introductions the Queen reappears at her side and remarks on Michelle’s height and then both confess that their shoes are extremely uncomfortable. I love how normal that sounded.

Obviously Trump had to come up and she did not shy away from her feelings towards him, his campaign trail and his inauguration. It felt like a fresh of breath air to hear her voice what so many people feel.

As I said before this was a fantastic listen and one I thoroughly recommend on audio, especially if you’ve never listened to an audiobook before.