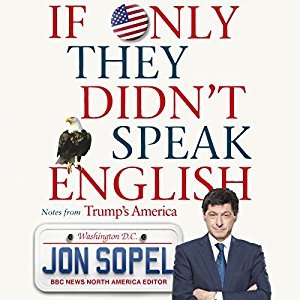 Goodreads blurb: As the BBC’s North America Editor, Jon Sopel has had a pretty busy time of it lately. In the 18 months it’s taken for a reality star to go from laughingstock to leader of the free world, Jon has travelled the length and breadth of the United States, experiencing it from a perspective that most of us could only dream of: he has flown aboard Air Force One, interviewed President Obama and has even been described as ‘a beauty’ by none other than Donald Trump.

Through music, film, literature, TV and even through the food we eat and the clothes that we wear we all have a highly developed sense of what America is and through our shared, tangled history we claim a special relationship. But America today feels about as alien a country as you could imagine. It is fearful, angry and impatient for change. Reflecting on his journey across the continent to cover the most turbulent race in recent history, Jon Sopel lifts a lid on the seething resentments, profound anxieties and sheer rage that found its embodiment in a brash, unpredictable and seemingly unstoppable figure.

In this fascinating, insightful portrait of American life and politics, Jon sets out to answer our questions about a country that once stood for the grandest of dreams but which is now mired in a storm of political extremism, racial division and increasingly perverse beliefs.

I remember seeing this book in an email last year and thinking how interesting it looked, so I was really pleased when it was available at a reduced price on the Audible daily deal. Like a lot of people around the world I’ve been following Trump’s presidency in utter bewilderment and so I hoped this book might help me understand what’s been going on.

I was expecting a really interesting book about the differences between the US and the UK narrated by a top BBC journalist, but to be honest with you when I first started listening I was so disappointed. The opening chapter didn’t grab me at all, in fact I thought I’d made a huge mistake and this was going to be the dullest audiobook I’d ever listened to. Fortunately it grabbed my attention and turned out to be the riveting listen I’d hoped for.

I’ve learned so many eye opening facts about America and the culture, that I’m still talking about it with family and friends a month after I finished it. I’ve never travelled to the States and I’d love to be able to discuss this book with anyone who lives there, so I can get their perspective on what Jon Sopel has written.

I definitely recommend this if you enjoy non-fiction books.