I’m taking part in the Blogging From A-Z Challenge April 2017 with the theme of books. I’ll be blogging about the books on my Goodreads shelf that I’ve read or want to read.

Today’s letter is W and the book I’ve chosen is The War of the Worlds by H. G . Wells. I don’t normally read, let alone enjoy sci-fi, but I love Jeff Wayne’s musical version of this story and have listened to it numerous times. I read this book back in 2012 and was surprised by how good it was. A must read for any lover of sci-fi or classic fiction. 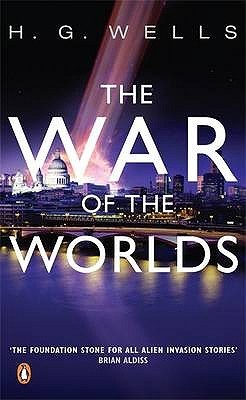 “With H.G. Wells’ other novels, The War of the Worlds was one of the first and greatest works of science fiction ever to be written. Even long before man had learned to fly, H.G. Wells wrote this story of the Martian attack on England. These unearthly creatures arrive in huge cylinders, from which they escape as soon as the metal is cool. The first falls near Woking and is regarded as a curiosity rather than a danger until the Martians climb out of it and kill many of the gaping crowd with a Heat-Ray. These unearthly creatures have heads four feet in diameter and colossal round bodies, and by manipulating two terrifying machines – the Handling Machine and the Fighting Machine – they are as versatile as humans and at the same time insuperable. They cause boundless destruction. The inhabitants of the Earth are powerless against them, and it looks as if the end of the World has come. But there is one factor which the Martians, in spite of their superior intelligence, have not reckoned on. It is this which brings about a miraculous conclusion to this famous work of the imagination.”

What do you think of my choice for the letter W?

What would you have chosen?